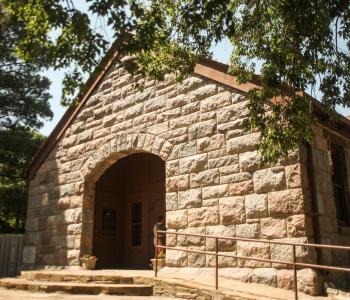 The first development of Fort Abraham Lincoln State Park happened during the 1930s with the establishment of a CCC camp at Fort Abraham Lincoln. Young men working to support their families during the depression joined the ranks for the CCC. The CCC was responsible for the building of the park’s campground, roads, Blockhouse reconstructions, Visitor Center building, and reconstruction of 5 Earthlodges on the On-a-Slant village site. They also mapped and laid out the cornerstone markers that show were the buildings that made up Fort Abraham Lincoln and Fort McKeen stood.

Today you will find just outside the park Visitor Center the 39th “CCC Worker Statue” Dedicated on June 14th, 2007 honoring all those men and the hard work they did in our North Dakota State Parks.

Lake Metigoshe State Park benefited from President Roosevelts “New Deal” through the Works Progress Administration (WPA) established in 1933. Construction of a transient WPA camp on a portion of “state school” land adjacent to Lake Metigoshe.  Log and masonry facilities including a dorm building with adjoining kitchen facility, landscaping and roadwork were the primary construction activities taken on by the WPA’s.  Of these facilities, only the group kitchen remains, however, the park roads and trails, initially constructed by the WPA stay as they were constructed.