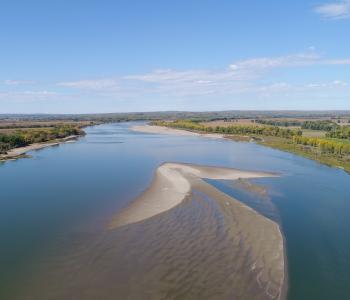 North Dakota's history is rich with stories from the Lewis and Clark Expedition, also known as the Corps of Discovery. The expedition came through North Dakota twice between 1804 and 1806. In fact, this is where they met and built friendships with such important figures as Sacagawea, Toussaint Charbonneau and Sheheke-Shote. Visitors retracing Lewis and Clark’s footsteps can experience the same landscape and cultures the Corps of Discovery encountered in a number of different ways.

While the Lewis and Clark Expedition did not spend any noted time at this location they did winter just a few miles upstream from this Park. Cross Ranch State Park is located along some of the last free-flowing and undeveloped stretches of the Missouri River.  While exploring Cross Ranch State Park, visitors may find themselves traveling back in time, catching a glimpse of the landscape as it appeared to Native Americans inhabiting the area hundreds of years ago, or hearing the echoes of the Lewis and Clark Expedition making its way to the Pacific coast along the Missouri River.

As the Lewis and Clark Expedition floated up the Missouri River, Clark noted in his journal the abandoned Indian village. The village referenced in the Expedition journals was the Mandan village, named On-a-Slant (Miti O-pa-e-resh). After prospering on this site for two centuries, a smallpox epidemic hit in 1781 and virtually eliminated the Heart River-region Mandan. The survivors moved north along the Missouri River, eventually joining the Hidatsa near the Knife River. When Lewis and Clark discovered the deserted On-A-Slant Village in late 1804, it was already in an advanced state of decay, for they reported that the remains included fallen heaps of earth, which had covered the houses.

Today On-a-Slant Village is a state historic site and has 6 reconstructed Earthlodges including a large Council Lodge. Tours take you through the village and give visitors an insight into the lives of the Mandan people who once lived at On-a-Slant.