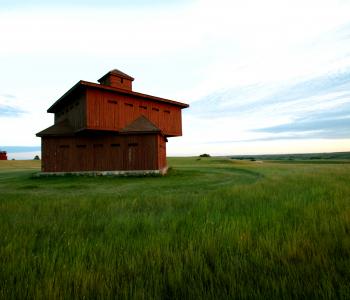 In June 1872, Fort McKeen was established on a bluff above the confluence of the Heart and Missouri Rivers. This two company post sat above the ruins of the On-a-Slant village, which the Mandan had abandoned a century earlier, and offered sweeping views of the surrounding landscape. In preparation for the Northern Pacific Railroad to lay its track to the west through the Missouri River basin, the military dispatched these companies of Infantry to the area to provide protection for the survey and construction crews. The name Fort McKeen was short-lived; the designation was changed to Fort Abraham Lincoln on November 19, 1872. In 1873 Congress authorized the addition of a cavalry post and its construction was mostly completed the same year.

By 1874, Fort Abraham Lincoln housed three companies of the 6th and 17th Infantries and six companies of the 7th Cavalry, making the fort a nine-company command. With a total complement of about 650 men, the fort was among the largest and most important forts on the Northern Plains.

Lt. Colonel (Brevet Major General) George Armstrong Custer was the first commander of the enlarged fort and served here from 1873 until his death at the Battle of the Little Big Horn in 1876. Upon completion of the railroad to Montana, Fort Abraham Lincoln had fulfilled its primary purpose. Consequently, the fort gradually declined in importance and in 1891 it was decommissioned. In its heyday, the fort encompassed 78 separate buildings. All of the original buildings were dismantled by area settlers and the materials were used in the construction of homes and farm buildings.

Today, due to past efforts by the Fort Abraham Lincoln Foundation,  reconstructions of the Commanding Officer’s Quarters, Central Barracks, Granary, Commissary, and Stables now stand on the site.

The Victorian-style home of George and Libbie Custer is open for living history tours. Step back in time and learn about life at Fort Abraham Lincoln while the Custers lived in North Dakota.

Fort Stevenson was envisioned as one of a chain of forts that were to be built to oversee the emigrant route from Minnesota to the gold mines of Montana and Idaho. Fort Stevenson provided a military presence near the Mandan, Arikara and Hidatsa tribes at Fort Berthold. It was also to serve as an intermediate point for the mail routes that extended from Fort Rice to Fort Buford, and from Fort Benton to Fort Totten. Finally, and what became the primary function of Fort Stevenson, was that of a supply base for Fort Totten, 126 miles to the east.

A replica of the fort's original guardhouse has been constructed in the park and houses interpretive exhibits on the history of the fort and the Missouri River.